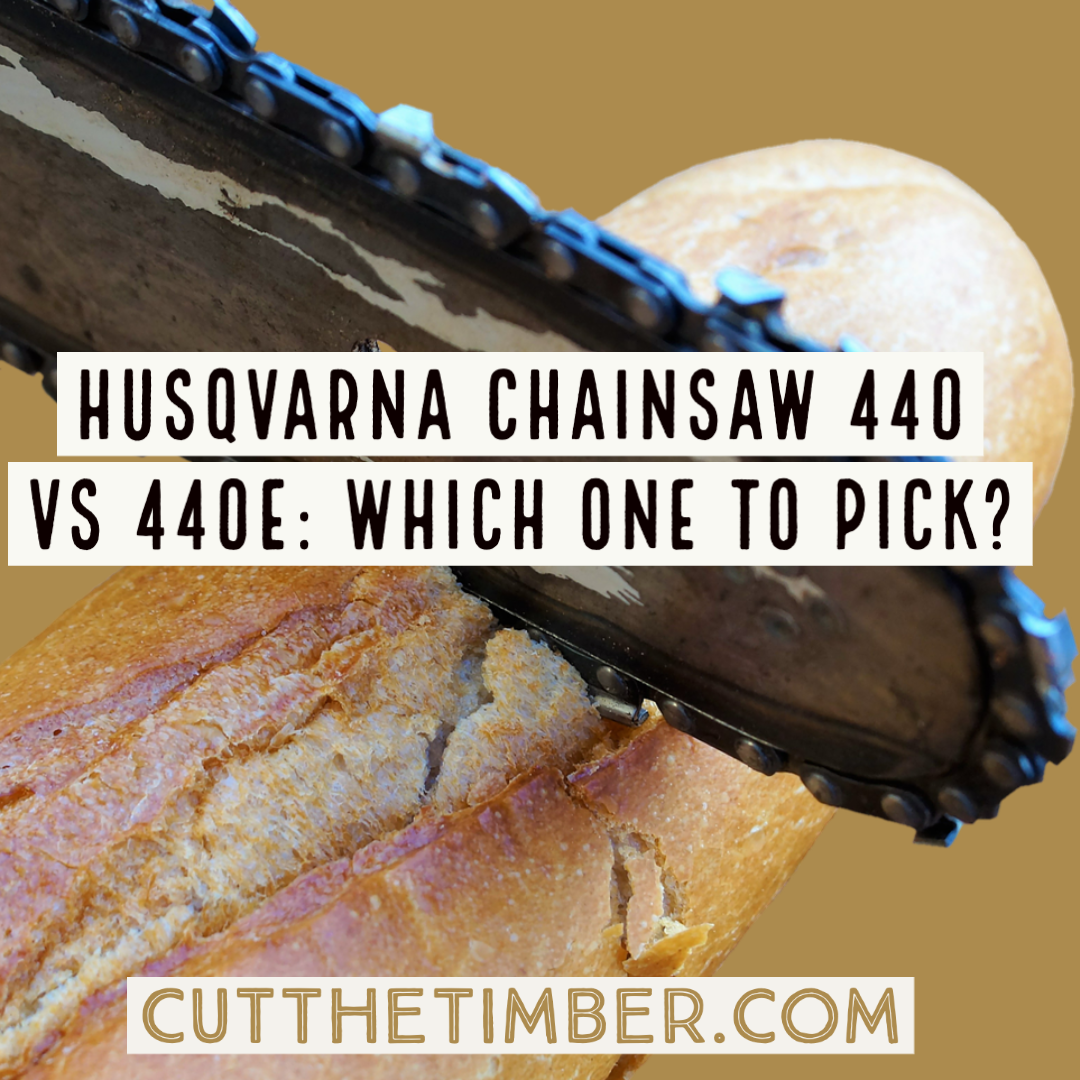 When it comes to outdoor and heavy power tools, the Swedish giant Husqvarna is one of the best brands to consider.

They produce excellent quality tools for various price ranges with some of their items are widely regarded as the best in their field.

Among the most popular chainsaws on the market are the 440 series, which is a step down to the 550 while packing some excellent features.

However, the 440 series contains the original 440 model and its successor the 440e. So, which one is better?

In the following article, we’ll put Husqvarna Chainsaw 440 vs 440e head to head to find which one is better for you. 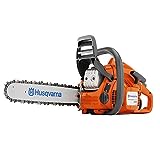 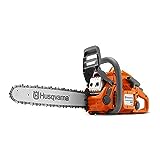 A Brief Overview of Husqvarna Chainsaw 440

The Husqvarna 440 chainsaw is a gas-powered chainsaw with a 40.9 ccs 2 cycle engine design that delivers a sheer power of up to 2.4 HP.

It’s the original chainsaw for the 440 series and has been the only option for a long time until the 440e arrived.

The engine delivers up to 9,000 revolutions per minute and is coupled with X-Torq technology that gives the chainsaw more power for less consumption of fuel while operating. 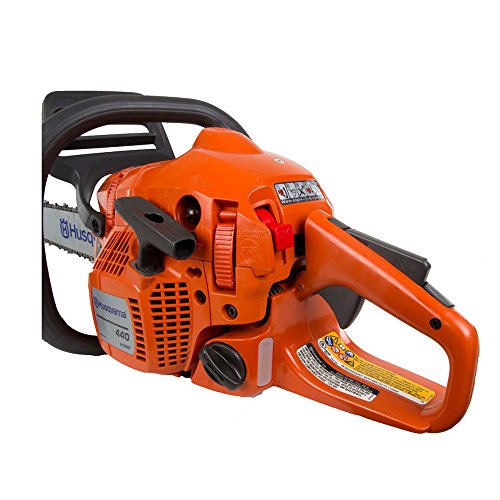 Another impressive benefit of the X-Torq technology is that it saves the environment by producing much less emission, which makes the chainsaw compliant to a lot of strict environmental regulations

As for the guide bar, this one boasts one of the large guide bars on the market that has a maximum bar length of about 18 inches.

Not only that it’s also marked with specific markings and sharpened in a way that makes the blade remarkably precise while operating on different thicknesses of wood.

The air injection system removes dust before entering the engine, which allows you to use clean the quick-release filters much less.

The Husqvarna Chainsaw 440 weighs around 9.25 lbs, which is significantly lighter in weight than a lot of chainsaws on the market, despite being gas-powered.

As for the tensioning system, the devices use a T wrench that comes included in the package for adjusting the chain’s tension.

The Husqvarna 440e is the newer version of the 440 chainsaw series. It’s a relatively lightweight and easy to use chainsaw compared to other models of its price range.

Similar to the 440, this one comes with a similar 2.4 HP motor of 41 ccs displacement and 9,000 revolutions per minute speed, so it’s basically the same engine. 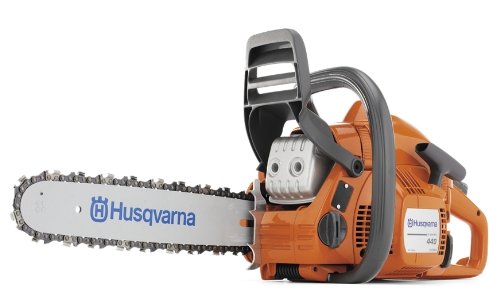 It also uses the same X-torq technology, which helps in reducing fuel consumption as well as emissions produced from the engine.

Mechanically speaking, the two chainsaws are basically the same thing. It features a durable guide bar of 16 inches length,

One great feature that the chainsaw 440e, as well as the 440, has always had is the ease of starting, thanks to its Smart Start System technology.

With such innovative technology, Husqvarna’s chainsaw eliminated the arms fatigue from yanking the chainsaw multiple times for the engine to start. This makes it a lot easier to use, especially during winter.

When it comes to adjusting the tension of the chain, the 440e boasts an excellent toolless system, which eliminates the need for T wrenches while re-tensioning the chains.

What Are the Differences Between the Two Models?

As you now know, the two chainsaws are mechanically the same thing. They both have the same engine as well as the same technologies that are built-in, such as the Smart Start button and X-Torq technology.

This means that you shouldn’t experience any differences while using both of the chainsaws. It’s noticeable that the 440e is slightly heavier than the 440; 9.7 lbs against 9.25 for the 440 model.

However, at such a very slight difference, it’s highly unlikely that it’ll affect the performance of the device while cutting in any way. 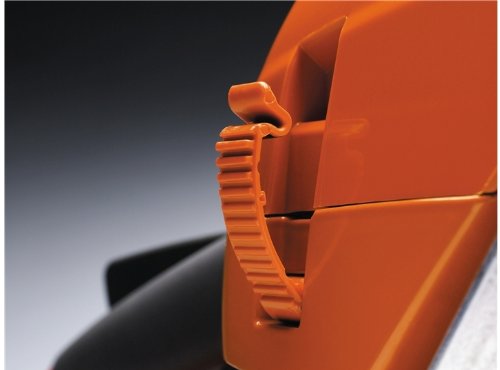 Another slight difference between the two is that the 440 has a guide bar length of 18 inches while the 440e tops at 16 inches. Since the sweet spot of cutting is usually at 16 inches, such a difference is also negligible.

The tensioning system of the chains is probably the only variation between the two devices that makes an actual difference.

The 440 comes with a T wrench that you use to tighten the tension of the chains. On the other hand, the 440e comes with a toolless method and a built-in adjustment system that eliminates the need for keeping a T wrench on you.

The price of the two chainsaws is at constant ups and downs, however, both of them play around technically the same price mark. With the added feature of 440e, this is considered a slight advantage to its favor.

Final Verdict: Which One to Go for?

There you have it. A complete guide that puts Husqvarna chainsaw 440 vs 440e, so you can pick the one that suits you the most.

As you can see, the two chainsaws have a lot of features in common between them. For example, both of them come with similar motor specifications and technology features. They’re both easy to use and quite affordable, which makes both of them ideal candidates for beginners.

Although they have some differences in weight and price tag, most of these tiny differences are negligible and won’t make a huge difference, especially for someone who’s using the machine for the first time.

However, the real difference between the two comes down to pretty much one main feature, which is the tensioning system. The 440 uses a T wrench, the 440e doesn’t need external tools.

So, as you’d expect from an upgraded model, the 440e is easily the winner in this round and is the one you should go for. To keep things clear, while toolless tensioning is a handy feature, it’s still a very minor advantage.

In other words, if you’re able to pick the 440 chainsaw model at a mouthwatering discount, then it's worth overcoming that small difference. But since they’re originally priced almost the same, you’re better off going for the newer 440e model that’s slightly more user-friendly.